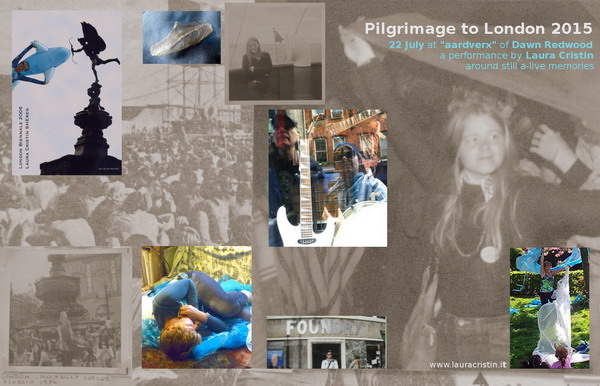 Legenda of the colour pictures (from up left): 1) London Biennale 2006 card, 2) velella velella fish, 3) with Dawn Redwood in London, 4) impromptu at Hillside Gardens in 2011, 5) at the Foundry in 2006, 6) performance at aardverx in 2011. In the sepia background images from a-live memories album of 1975: at Piccardilly Circus, at rock festival of Reading and on the boat to Douglas

Pilgrimage to London 2015 July at “aardverx” of Dawn Redwood
When I was young, I used to go to “Inghilterra” during the Summer to practice/learn some English that I had previously roughly caught from BBC lessons/broadcasting on short waves. One way or another – working as au pair or as a chamber maid on a wealthy hotel located in a Thames’s island – I could earn my living beside studying and attending rock festivals. Years later, then came the vacations in camper with the family (progeny in tender age included) sleeping sometime, to cut the costs, in underground car-parks looked after by angry dogs… More or less ten years ago, I started to approach the UK land in an artist capacity. Several participations in London Biennale, a beautiful performance at the once mythic “Foundry”, impromptus at Hillside Gardens took place among many other art actions. Every time I go to London, my heART beats and regenerates at “aardverx”, that is run as an alternative/genuine art space by Dawn Redwood. Its motto is: –(Art) is a hard work but somebody has to do it –. This time, in July 2015, I go back to the places that have undoubtely marked my emancipation from the narrower minded 70ies in Italy. It was/is an oxigen breath. A sort of – far from nostalgic – pilgrimage will take shape during my stay. Coming from the Mediterranean and with the recent bEAUtiful experiences as Sherena Velella in Ponza, I will perhaps bring a ray of light and a little wave in the misty city. For sure I will visit/perform again at Ebury Street where Mozart composed his first symphonies. Maybe I will be tempted by brand new impromptus at Peter Pan’s Kew Gardens or at Crystal Palace that had hosted an international exposition in the past like the current Expo of Milan.Though, the core of it all will be the performance inside the red bricked building of aardverx on July 22nd on the occasion of the annual Bday of Dawn Redwood, deeply immersed in not-only-my Times.