Making illustrations for books comes at a certain point, as a desire to transfer my imaginary with/on different media/supports than oil on glass. At an Open House of 1994, in the gARTen of my house, while showing self-portraits as a goose, I met Angelo Signorelli, just awarded the Andersen price in literature for children. He asked me to illustrate some fairy tales and soon I immerged myself in the new technique of gouche on paper. It was a challenge because it was quick and did not allowed time for hues, second thoughts and corrections. In a couple of months the tables were ready and appreciated… to the point that some of the illustrations were printed in a book and chosen for the film “La Storia del Cantastorie” by the Slovenian Television. Other works succedeed and became books, calendars, were selected at fairs or in contests, like “friuli D’OCa” (a goose game scheme revisited) or an introduction to art that was published in “Parole per te” (B. Mondadori, 2000). But at some point I realized that the images/texts I was producing were not free at 100%. At Cill Rialaig retreat in 2003, with “SHirEn meets dolpHEn”, I turned to Artist Books. I discovered that I could/can craft whatever I want, in one original copy or in any number and size, assembling sheets of paper, laminating emotionally valuable scraps, using ready-memo pads to fill with not-only-my-stories. Flick books — that give motion to the pictures inside — came next, as the pocket-size accordion books pleasant to read along the way. 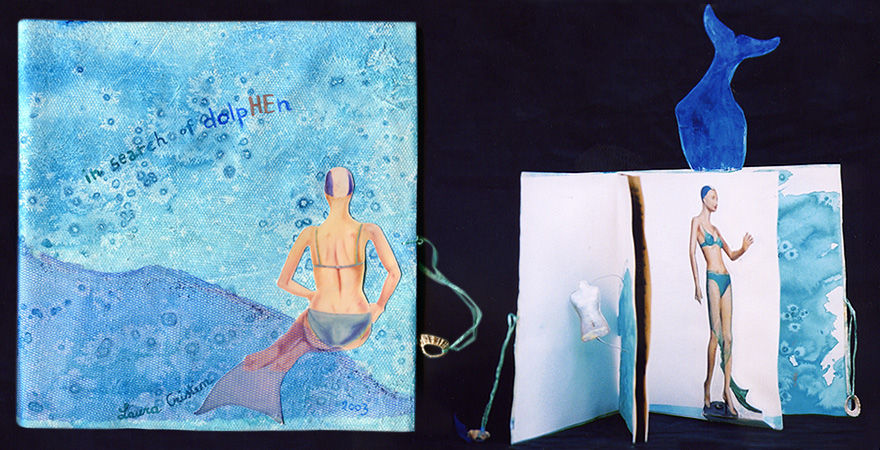 “in search of dolpHEn”, handmade in 2 copies, collection Cill Rialaig, 2003