The awareness of being an installation/artwork and the desire to act/move in various ways out of the frame/rules appears clear in a photo/self-portrait of 1997. I pose next to “Totem II” and “…comme un oiseau” is in the background. The two works were just finished, on the memory of a New York visit of my daughter and I for her 15th birthday. At that time I did not know what the performance art was and I was still unaware of it a few years later in 2003, during my first visiting artist residency in Ireland, at Cill Rialaig. Though, on the beach of Dingle, while playing with the tulle SHirEn and dolpHEn flukes-appendices I had made in Italy, I could clearly feel the dolphin Fungie breathe (even if he perhaps was miles away). I clearly sensed my acts as a serious game. What I was doing was important and meaningful, regardless an object or a photo produced. In that precise moment I realized that painting was not enough. I wanted to go further, searching for the freedom to practice an art that changes and makes you change, urged by the intimacy and the facts of the ordinary life that everybody recognize as universal values. Alone or with the right company. This proceeding in the ephemeral that counts/remains can appear rambling or ineffective at first glance, but ‘this is my way’: the very important things/acts are always recorded by heART and take beautiful shapes at the right time. 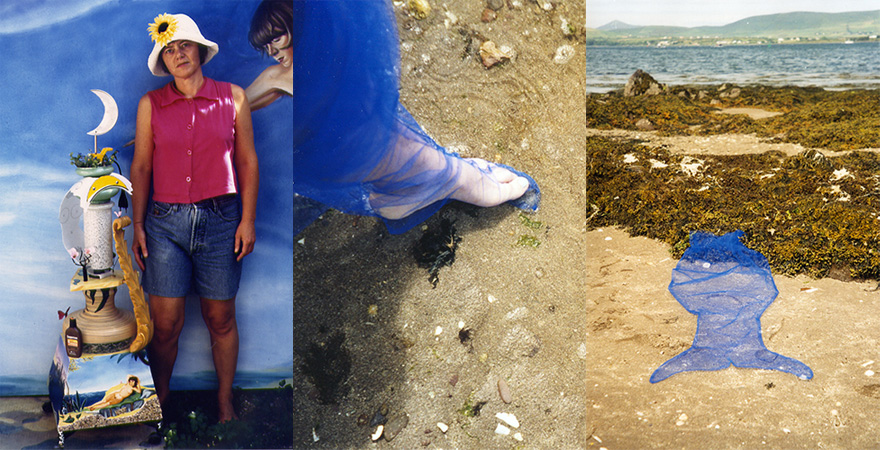 in order: performance “Sheren in A-MexicO” at Academia de S. Carlos, Mexico City, © photo: Antonio Juarez, 15 May 2006; card for “London Biennale 2006”; card for “Temps Éternel” performance in Paris, © photo: Giosuè Marongiu, 2011; ”Just life” performance in New York, 14-21 June 2012
First 5 minutes of “in A-MemOry of W(hale) A. Mozart” that took place at Orleans House for London Biennale. It was dedicated to Mozart's 250th B.day and to the death of the W(hale) in the river Thames investigating the bridge between mortality and the intangibility of Time/Music. Video by Adam Nankervis, music “MareA” by Dario Della Rossa. 15 July 2006
“Water” took shape as part of the Irish quadriptych (including Fire, Air and Untitled) in Ballinskelligs IE, during my second residency at Cill Rialaig. It was self recorded/filmed in a rainy day, with the camera and the mp3 player inside the cottage. On that day, I wrote in my diary: oggi credo di aver messo a nudo tutta la mia fragilità, ma anche la mia voglia di vivere!! 9 July 2008
“AquaS-core” occurred in May 2010 as a main flowing of notes, feelings, sounds, emotions, colours in a trip South-West to North-East of Italy, from Cosenza's Ninfeo to Palazzo delle Prigioni in Venezia. As memories were rearrenged in a video, three years later, reminiscences of not-so-past Times appeared: from a hitch-hike ride up to Scilla to a sprayed Princess in the city suspended among the Sea and the Sky, 1973-2008-2010-2013