A Special Day (in #57BiennaleVenezia)

Some days are special: magic connections occur. Dates, places, persons interwine, synchronize with wider contexts/times and generate unpredictable schemes. The 10th of May 2017 in Venice was like that. The pretext for the stars to work at their best, was at the 57 Biennale, for the inauguration performance by David Medalla and Adam Nankervis of their Mondrian Pavillion. For the day out, I had in my knapsack the basic for art/life. I can’t describe how it has been: to meet new and old friends at the official event and after, when we all gathered at Paradiso cafè. No words would honestly depict the undefinable sense experienced when one “is fully present” just because “is not”. In fact, everybody were there to tribute sincere affection, not for taking advantage of somebody else’s fame/success. On the way back to the railway station, I stopped at Palazzo Ducale where an exhibition by Bosch was just waiting for me. Once in front of “Three Souls Ascending the Empyrean”, I took out of my bag a little panel (featuring mine and two other souls in Venice 2008) and I posed it, for a quick snap, next to the one of the Master. MayDay 2017 has also had some references to Birth Day(s): mine, in middle June, and other. Ephemeral installations were possible, with a sticker portraying Joel Cohen (lit up with nacre from S. Maria di Leuca 2005) and our joint performance of 2012/06/14 in Coney Island. One month later than MayDay 2017, having received from New York a number of stickers corresponding to the years of my life, I started to hand them out for “LOOKing forwards”.
Meeting friends and big artists – one way or another – is always. wonderful!

Topics of the Day in Venice: sticker by Ragged Edge Press installed at Giardini entrance of “La Biennale di Venezia”; inauguration performance of the Mondrian Pavillion by David Medalla and Adam Nankervis, curator Christine Marcel; impromptu with “Totem 2004-2008-2017” (acrylic on panel 2017) by Laura Cristin and “Three Souls Ascending the Empyrean” (oil on panel 1505-1515) by Jheronimus Bosch at Palazzo Ducale, 10 May 2017 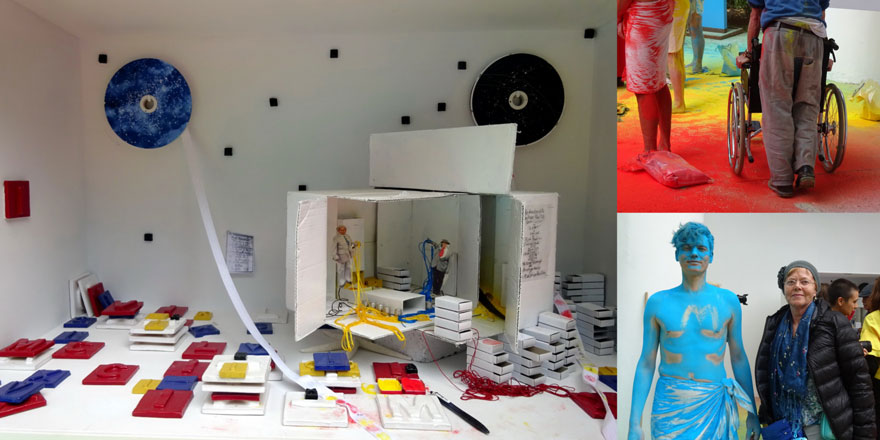