In the (old) times the fountain pen was used for writing in diaries, then biros and the like were supplanted by typewriters and technological stuff. I have always loved to fill up note-books, whatever instrument I had at disposal: a goose feather, a nib, a fine brush or a camera. Habit had survived nowadays, with the excuse of keeping documentation of the “etceteras”. Maybe here – in collecting and /or reviving memories – lies a significant key of my research. Handwriting is beautiful because one can choose so many types of sheets and explore calligraphy or visual poetry. I am also enchanted by new and foreign languages, that I can mix in the titles or in the concepts of art pieces. I also like to be able to see a “L” for Laura instead of Large in a dress label or a heart shape in a mud puddle. Best thing actually is “choosing” what’s worth to be recorded in a-not-so-personal diary or to pick up from the past. This is thrilling, as when I selected – more than 30 years later – a black and white photo of me, 13 years old, masked as Lucia from the historical novel by A. Manzoni. It served me for the painting of the installation “Two women” in Milan (“The Bethroted and the Ideal City”, 2002). Literature is appealing/fascinating especially if re-lived in a impromptu at Latitude 45° N, Longitude 13° E, in sight of the Castle where Rainer Maria Rilke wrote Duino Elegies, Dante and Liszt stayed (“Duino Paradiso Equinox” 2008). I like to take travel notes on the way, perhaps the most intimate ones are not so tangible, because they are written in the ephemeral that lasts/counts – recorded by heART.

“Two women: Gertrude and Lucia”, acrylic on mannequin and on hemp, exhibited at Sassetti Cultura in Milan , IT, 2002
Card for the performance “DASHeren: lavare i panni in Arno”, Festival Creativa, Rignano, FI, May 2005
Mail art sheet “ALT”, few lines from a Rilke's poem painted in oil on laser printed film, collection “Oltre i Limiti”, Firenze, IT, 2008 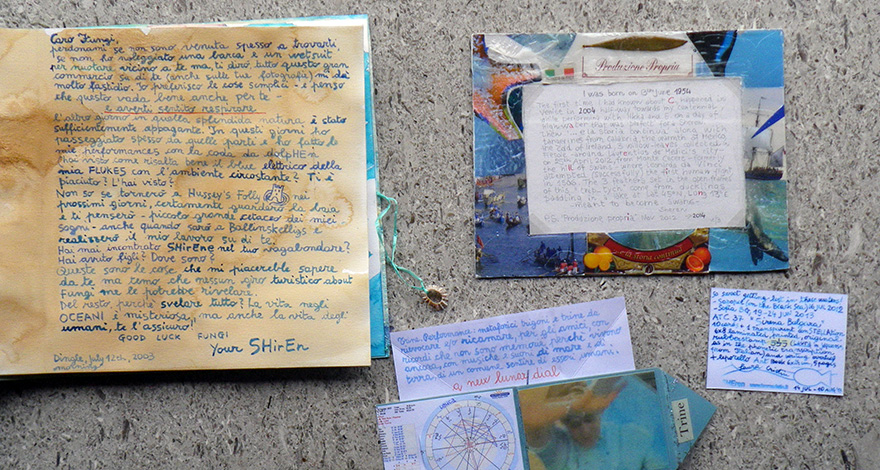 Different types of handwritings (left to right): "letter to Fungie" painted in acrylic on paper tinted with tea, 2003; ATCard "Trine", acrylic on paper, 2011; back of a card containing Laura in Japanese, calligraphy with nib and ink, 2013; "Cavellini open frame" (inside), pencil and biro on cardboard, 1914-1954-2014