The first ‘real’ travel (alone , by train) occurred when I was 14 years old. I went as far as Rome — 500 km from home — to attend the radio program “Bandiera Gialla”. Patty Pravo sang there and “OB-LA-DÌ OB-LA-DÀ” was the song of the week. Travelling has always enchanted me and I have been practicing it in many ways, with every available mean, starting from my feet and the bicycle. Most of these were later/subsequently documented in a piece of (art) memory: from the yellow cabs of New York or the red Ferrari co-starring in the film “La storia del cantastorie” (TV Ljubljana 1995) to whatever — from boats to airplanes — can wander in the blue sea or in the sky. There I can move with greater agility, especially if aided by the phantasy that makes me see the low settling of a feather or imagine a “oisEAU”among butterflies, angels , mermaids, dolphins etc. I also paint portable paintings on nonwoven textile, named “Sherensigns” easy to carry here and around, especially if rolled up on the stick of rain. Every now and then I group/act in TRIP-tychs, because I feel that a sequence of 3 is like a suite where the Space is developed in the Time. As for the luggage, I left a black suitcase with New York sticker as “unclaimed luggage” in Madrid in 2005, at the Circulo de Bellas Artes at the end of a voyage/exhibition from Cyprus. Then I turned to a trolley as hand luggage. There I can accomodate whatever is essential — like Sheren’s outfit and accessories — in case the checked-in suitcase gets lost. 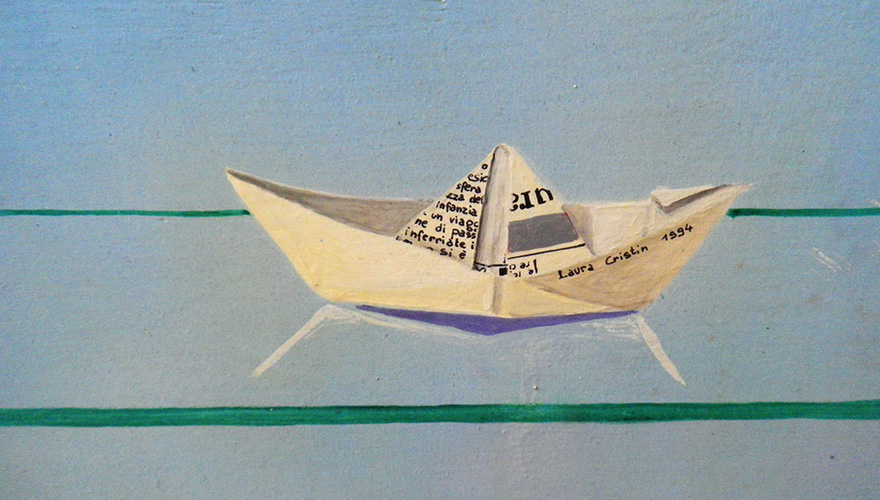 Detail of the paper boat in the screen “Wonderbookcase”, acrylic on wood, 1994

Card for the performance “Unclaimed luggage”, Circulo de Bellas Artes, Madrid, 2 February 2005
Cycling around Ballinskelligs Bay, IE, 8 July 2008
Selfportrait in Venezia-Mestre railway station during the performance for 6th Day of Contemporary Arts of AMACI, 9 October 2010
“The butterFly” was filmed in Duino, along the Gulf of Trieste, Italy, in a magical place where the river Timavo reaches the surface after 30 km of underground flowing. Two hands Fly, as the butterfly painting (that came out from a performance at the Tarots' Museum of Riola, BO) that takes off, from two feet, © music: Dario Della Rossa, August 2007

Action with Sherensign “LoveS” in the poplar grove at Lat 45°N, Long 13° E for the opening of London Biennale, 1 May 2010
Performance at “Belgrade Art Fair”, swinging on “Vessel” (by Trond Arne Vangen), © photo: Nenad Bogdanović, 26 October 2012
“SherenaDa TRIP-tych“ features performances at Hillside Gardens in London , at Polveriera Napoleonica in Palmanova, UD and at the Père Lachaise in Paris in April-May-July 2011