The collage-decollage-assembling comes from a state of (confused) mind seeking a kind of peace in the art practice. In the beginning it was the wunderbookcase of my sitting room that I depicted as an open structure for my thoughts, worries, hopes… Fragments of memories (tickets, little objects) were later nestled in paintings directly (to save me from describing small details) or assembled in various forms like in the “Totems”. It’s my way to explore the theme of “still life”(!?) with a sincere attention to the objects and to the materials met everyday. Hemp sheets from my grandma dowry were used in most of the paintings of the series “S-H-E”, various worthless-pieces are still revived in the performances or through the ‘high-relief’ of the “tAbleau vivant” that led me to transform a thin slice of poplar tree in “YOUth 1/2”… Whatever the result, it’s the process that counts. The chaotic state of mind can be quieten in the narrative of the hearth: a (temporary) relief.

“Wonderbookcase”, oil paints on glass, 1987; “Autoritratto No. 1”, memories around a Disneyland ticket and other scraps, oil painting behind the glass top of a coffee table, 1990 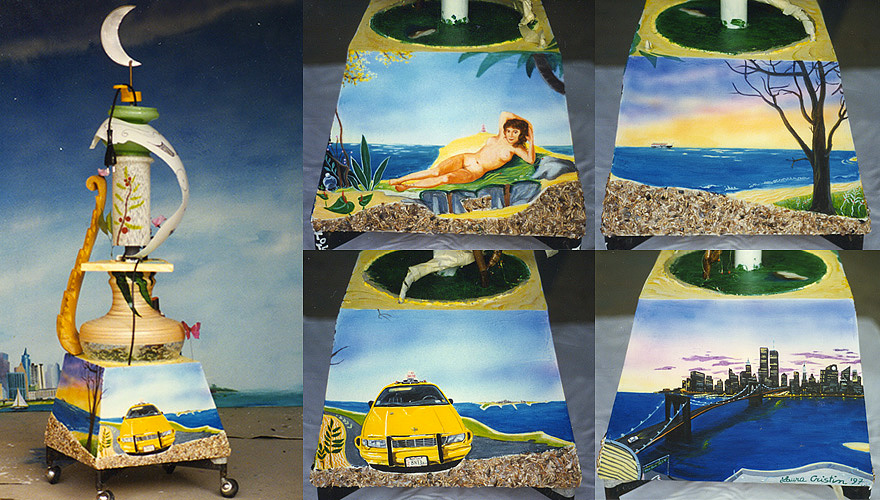 “Totem II: idee in con-occorrenza” assemblage of various materials, painted in acrylic, detail of the base representing New York City in the 4 seasons, along a line of 'real' shelves, 1997

Front and back of a piece of mailart collage “SHEren&dolpHEn: a new identity”, 2004
“S-composta testimone dell'Unità d'Italia”, photo of a multimaterial assemblage, 2011