The first (real 100% plastic) beached dolphin was found in 2005 on my name-day somewhere at Lat 41° N, Long 13° E. The Adriatic sea had left it among the black pebbles of Rodi Garganico. It needed to be cleaned first, and then re-inflated. I was moved by the discovery, since it reminded me the Fungie dolphin met some years before in Dingle. Instantly I figured out that it could have given a 3D shape to my idea of “dolpHEn”.The passage from dolphin to dolpHEn has much to do with the big simmetrical and vigorous tail called flukes. There, in this important appendage the cetaceans use for swimming and jumping out of the water for breathing, I had already imagined and painted — a pair of human feet – in Ireland. The inflatable exemplar found in Apulia revealed it/himself handy to be carried here and around, in case of movable live installations. It traveled a lot, and visited since: the Academia de S. Carlos in Mexico City, the Foundry in London, Atocha Station in Madrid, the Poranceto in Camugnano and many other places until it was replaced by a smaller one, received as a gift in Germany. The proper use of the latter (unmeant for floating in real waves as the first one) was to be a balloon. If inflated with ordinary human breath instead of helium, it does not fly away. Can also be “played”, by gently scratching the “skin”. I like to be surrounded by specimens of every size and materials: bags, keyrings, radios, neck pillows… they all speak of the Ocean. 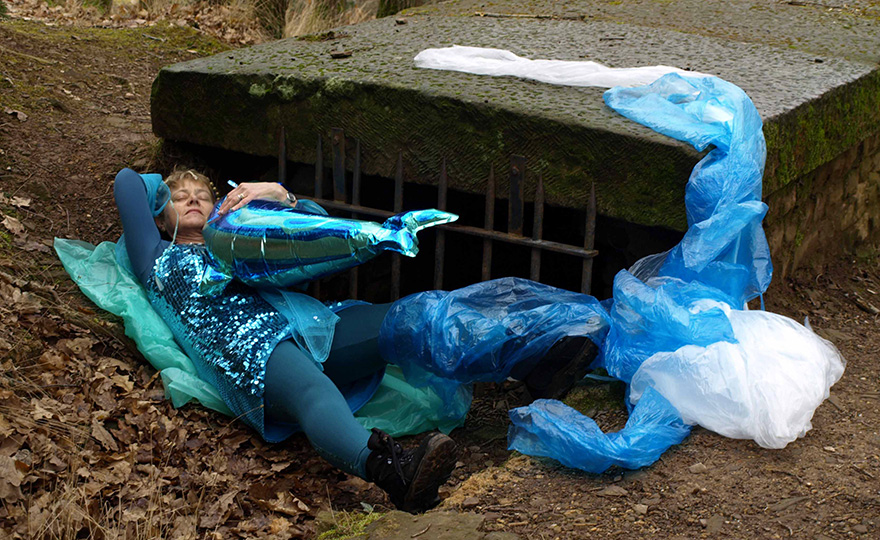 
“Action in G” took place at the History Museum of Bergamo, at the opening of an exhibition dedicated to Giuseppe Garibaldi (curated by Enzo Marino). The action gets deep into the private/intimate dimensions of the hero, in a metaphorical journey through the Oceans of Heart, using a moving and ever changing Siren/Dolphen installation, music by Dario Della Rossa, 10th of January 2008