The human figure has always attracted me, as an object to depict/represent at its best. The first attemps were very hard because I could not rely on a proper art education and I had to learn how to do it my way. Eventually, I choosed quite a difficult start: painting a group of children eating baguettes on a glass pane of 70×100 cm. “The Potato Eaters” by Van Gogh and a Summer holiday in Paris were the main suggestions. For the context, I had at disposal many pictures of the buildings of what I renamed “rue de la joie”. Though, I had to find some models for the kids. They were to be depicted first, according to the technique of oil paints behind glass. The solution was in a Postal Market catalogue where I could find plenty of smiling children in the right poses, ready to be copied. The work took several months to be completed and the results were good. In the following year I redoubled with “Le vacanze di Alice”, the report of an Easter holiday in Umbria. This time the confidence in my skills had grown as one can guess from the close-up of my daughter. Surfaces, tecniques, situations have changed and refined over the years (acrylics, airbrush, card-boards, nonwoven textile of the Sherensigns, ready-made stuff, etc.) but the joy of portraying significant people met along the way, has remained.

CD cover (unfolded) portraying Adrian Galindo posing for Sheren and Dolphen project after having filmed the performance “Sheren in A-MexicO”, acrylics and glitter on nonwoven fabric, collection of the director of Onirismos, 2006

From the travel notes diary: children at Ballinskelligs Bay, IE, during the Cill Rialaig art residency in 2008 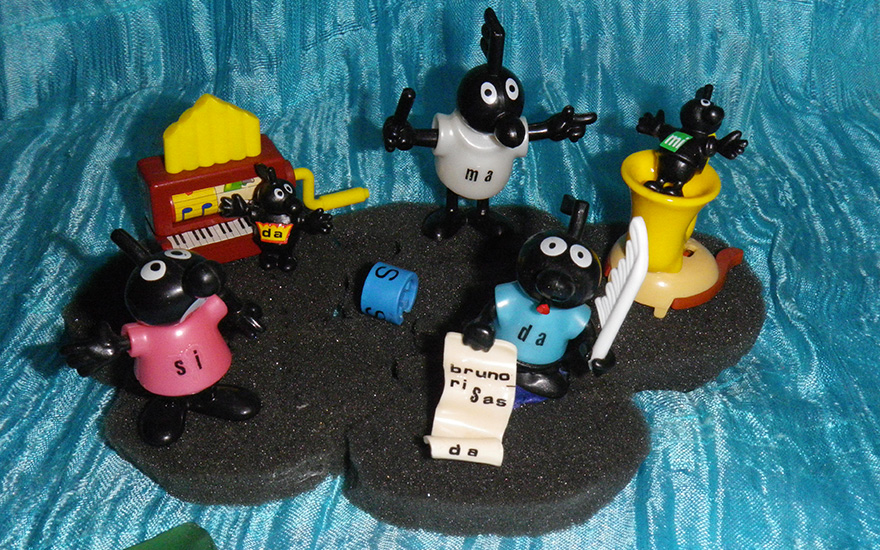 Installation “Brunoris as puppets”, figurines -- revisited as musicians -- were found in Kinder chocolate eggs, stuck in a 5 pieces-jigsaw-black-spongy-cloud, coming from the packaging of a keyboard, collections of Brunori sas members, 2010