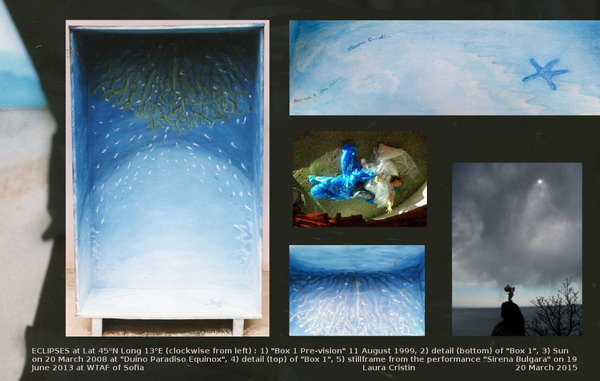 At Lat 45° N, Long 13° E, I had some chances to witness the sun being overshadowed by the moon. First time has been at 7 years, on 15 February 1961. I was allowed not to go to school and my mum brought me – seated on the front saddle of her bicycle – to the gathering of firewood, 15 kilometres far from home. It was a sort of magic – at daytime – to suddenly find immersed in the darkness. It made me think of a Holy Friday when Christ was crucified and the sky turned night. Incidentally, I would have devoloped this impression many years later. The occasion was the performance “Duino Paradiso Equinox” on 20 March 2008, with Dawn Redwood (link to the video in “Places”). The (partial) eclipse of 11 August 1999 was planned in advance so that it could be lived in an artist mode. I spent the exact time of the eclipse painting the inside of a big wooden box whose exterior I had previously tinted in black. Then, in a couple of hours, closed in the camera obscura of my garage, while projecting and painting images of primordial aquatic life into the box, I recreated the inside of an eye, as pre impressed on the retina. “Box # 1, Pre-vision” took shape. This piece made me think of a moment of a not-so-distant performance in Sofia, on 19 June 2013, next to the Summer Solstice. I was lying in a lighted spot of a water tower as a chrysalid ready to sprout in a butterfly, in a sort of pre-life defined by a eye shaped background.
This time, on 20 March 2015, Spring Equinox, many astrological and not coincidences occur again with the eclipse of the sun and I am writing these lines as a keepsake of the Time.