Re-act&Re-vault: a story for 25 November (International Day against the Violence towards Women) 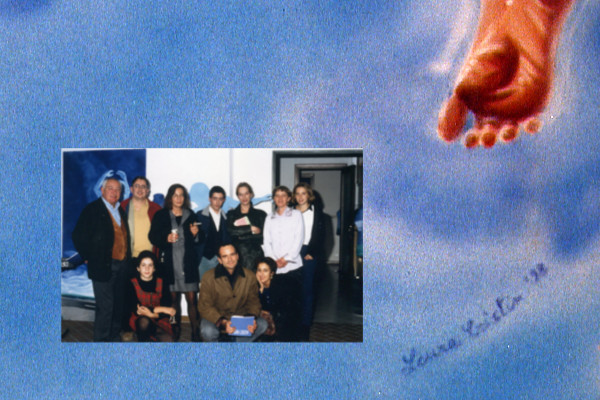 Detail of “oisEAU”, acrylic on canvas and photo of the last ones to leave “La Festa dei Buchi” at Laura Cristin’s home-atelier in Bagnaria Arsa, Udine on 25 October 1998.

On 25 October 1998, at my home/atelier of Bagnaria Arsa, Udine, “La Festa dei Buchi” (The Holes’ Party) occurred. The evening Party was preceded by the Open House “Lo Spazio Violato” (The Violated Space). It all happened exactly one year before the declaration of 25 November as the Day against the Violence towards Women (ONU, 1999). As for my little event – so significant for me – it took place few months after a violation of my art&life. Later I reckoned it as a landmark for my r-evolution. Antefact: in June 1998, while I was on holiday with my family, vandals had stepped into the workroom for a sort-of-not-so-metaphorical-rape of the latest canvases: mostly selfportraits, nudes. Holes were made in correspondance with the erotic point of the body. The precision the holes were made with, declared a fine perversity. Add the fact that I had left the canvases, leaning on the wall, not on display: The (un)knowns had searched for them, taken them out and put them back after the integrations. Written (sexual) insults here and there, clearly directed to me, crowned it all. Since no money or other valuables had been stolen or damaged, it was clear that the target was me. At the discovery of such a mess, returning from Spain, I was shocked, I felt devastated, unwanted by the physical space of the house. I couldn’t even walk in the front courtyard where the vandals had come from. During the following Summer I found the energy to re-act and I re-made – in different sizes – the raped paintings. In the bigger selfportrait, my face came out very sad but some other canvases like “oisEAU” resulted even stronger than the originals.
Then I thought to arrange an event, despite the disapproval and the no helpfullness of some intimate relatives. – What a mess for a childish action! – was the ritornello. From the beginning it seemed that the silence would have been the only accepted no-action. I should have been content enough having made the report against unknowns, which I did soon after the intrusion. Later it was soon dismissed and no results, apart from the note of lawyer’s fees. Unbelievable, as a victim, I was supposed to feel ashamed and guilty! Instead, I had the insolence, the days before “The Holes’ Party”, to personally mail the invitations all around the neighbourhood. I guessed that the author/s of the violence lived not far away since the damaged paintings and busts – part of the latest research on the body, starting from my own – were never exhibited publicly before. I wanted to share the facts with the local community.
The event was well attended. Among others, a group of poets “La Fabbrica dei Sensi” gave an emotional contribution. A journalist wrote an article for the local newspaper and Rita Mascialino an essay. I felt better, supported one way or another. In the following years, I managed to continue on the track of searching into subtle violences, re-volting that energy in positive ways/works. The subsequent art – made out with paintings, busts, Tarots research and performances – perhaps can explain all the journey so far, better than words. At the times it was/is difficult. This type of wounds can produce further damages and one has to be alert, to see beyond the hypocrisy, not to be deceived by whatever a perverse goodness can hide. The balances with the persons really loving you took a hit and everyone suffers, for long time.
I did not repaired the holes – optically irrelevant -. They are still kept in the paintings, leaning on the wall, in the garage, silent but concrete witnesses of such baseness and cowardice. Though they are submerged by new canvases. From “La Festa dei Buchi” I had been rather busy with facing and mending the lacerations of the soul. I had found useful to attend places where humanity is practiced. Along the years, the spaces of the house-atelier were heal-treated by many passages and loving presences. New musics had been played and other stories had been written or painted. Now I walk head-on in the courtyard. A few years ago the culprit has candidly admitted the prank. No excuses.
It is a constant alert not to allow anyone to take advantage and to feel stronger of our weaknesses!Sincere affections will remain strengthened. It is an endless task, but rewarding.