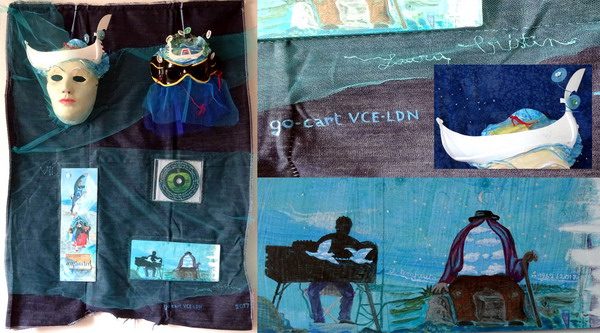 In September 2017 I will be in London, at the LOONIES FEST – Creating Healing Lunacy – in Kingsley Hall. The one day event of Saturday 9th (10am-10pm) includes Exhibitions, Performances, Poetry and a panel discussions.

The Private View for the “Survivors Stories”, a visual art group exhibition, is on Tuesday 5th (5-7pm), finissage on 19 th September. The Fest is run by FEEL (Friends of East End Loonies) and it is about mental health from the point of view of those who are often silenced by the system. Web page and full program at http://friends-of-east-end-loonies.blogspot.it/p/loonies-fest.html
Kingsley Hall Community Centre, Powis Rd, London E3 3HJ

My participations at the Fest, from the 5th to the finissage of 19th September relate to the frequentation, together with my family, to the Asylum in Gorizia (Italy) during Basaglia’s years (1962-72), ‘important imprinting’ of freedom for the courses of my art/life. The Fest offers a precious opportunity to go on with the ‘recovery tour’ started last year in Rome; a chance to immerse my autobiography in meaningful stories and places, so that to bring out something that can be shared and further developed.

The textile panel “go-cart VCE-LDN” will be shown in the Survivors Stories. It refers to the 7 th card of the Tarots, that deals with the body of the anima helping us in the human achievements. My work displays 2 gondola (masks) in place of the traditional Arcana #VII’s war-chariot. Basaglia – The Man who closed the Asylum (crf. J. Foot, Verso 2015) – was from Venice. San Clemente Asylum, closed in 1980, was also in its laguna. The disc OB-LA- DI, OB-LA-DA revisited 1968-2016 has to do with London and the Beatles and with the psychologist Letizia Comba, scholar of A. D. Laing. The painting “il terapeuta..1962è2017” included in the ensign, highlights the role of music.

“Healing in London” will be performed at the Loonies Fest on the afternoon Saturday 9th.
A panel discussion on the theme of the benefits and importance of the Arts as Healing Mediums will follow.
My action is a belated ‘thank you’ to Letizia Comba (1932-2000), psychologist in Basaglia’s team. As a teenager in difficulty, fifty years ago, I was “handed” to her care. She explored brand new ways to help me, with personal involvement/responsability, also accompaning me to Rome to attend “Bandiera Gialla” pop song radio program. Later I realized how precious have been the seeds received. I felt the task to guard them carefully and to cultivate them so that they had blossomed and fructified at the right time. Love can heal, can be a wave that caress, cuddle and support us. The action will re-create not-only- metaphorical-waves of memories in the original music composed by Dario Della Rossa. The gratitude is also for the many that donate their humanity and live through the daily practice of love, passion and freedom.

Last but not least, in and around Loonies Fest in London, I will fully explore the beauty and strenght of human relations, with old and new friend-artists, such as Dawn Redwood at aardverx. This fortnight 5-19 September will also serve for a fully immersion in U.K.’s mental health policies, comparing the state of the arts to the Italian ones.