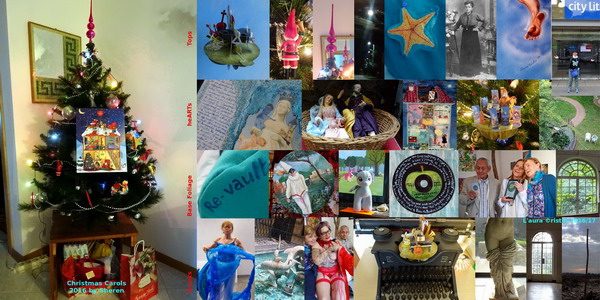 This year, approaching Christmas, I gave myself many stories that poured out from the memories of people, things and situations met in the months gone by. Soon the recollections linked with the past and developed in dreams for the future. A not-so-tangible ‘Xmas tree took shape in my heART. Next step was to try to make all this visible for the most, before letting it go. The story began with buying an Advent Calendar that resembled the “Wunderhouse” painted in 1987. Saint Nicholas helped me to get four tickets at the front row for a concert in Udine on 2017/02/24. At Saint Lucy Day, I found a pop-up card with the musical instruments in a stationery shop. Revisiting it with figurines so to create new balls, was my favourite past time. Then I sent it out so somebody else could play with it and invent brand new stories. Choosing the decorations for the annual Christmas tree was an apotheosis of memories, not to mention the supermoon of December that crowned it all! This © hristmas Carol is not for sale, but perhaps everybody can create his/her own moment of happyness, being inspired by the selection of trunks, basic foliage, hearts or tops of my tree.
SHARE :
Tweet