On Saturday, September 26th, 2020, at Forte Marghera (Venezia), Palmanova building, from 7 pm, at the opening of the international collective event “Stendardi”, organized by Officine, Rosso Veneziano, with the contribution of Itinerari 80. Exhibition lasts till October 11th.

“Giustisia and Fortesa” – in the Bisiac dialect which is my native language related to the Venetian – are cardinal virtues as well as two figures of the Major Arcana to be practiced as a way towards the never ending human enlightment. The standard personifies both Justice (VIII) and Strenght (XI), in Sheren’s art identity. They are connected respectively to the balance of Libra and to the constellation of Leo that holds the double star of Regulus in the chest, among the four regal ones of the firmament. The painting on canvas is as tall as me and seven times – but in proportion – larger than the Visconti-Sforza cards preserved between New York (Morgan Library) and Bergamo (Colleoni collection). It enters fully into the personal research of Tarotensigns undertaken in 2005 and which now counts almost the complete set of twenty-two, each of which is connected with precise moments of art-life. For the occasion the first “off-site” ensign made in 2005 for Giancarlo Da Lio and the Embassy of Venice, is brought back to the theme of the Tarot as the”Magician” who starts the whole journay.

It happens from Palmanova – the star shaped city near which I live – to the building of the same name in Forte Marghera, on September 26, 2020, to sanction and reaffirm an unprecedented twinning of freedom and strength.

On the first of May 2020, my thoughts are for the beauty of life and for the necessity of the art in the past, present and future!

The Ouverture of the “Suite for Dawn” is meant as a suggestion to prepare all of us for a new beginning after Coronavirus’ quarantine. I composed it with words (and images) according with the Baroque and Renaissance dance. Let’s start with Allemanda in a binary rhythm that refers to my installation of Lucia and Gertrude, as narrated by Manzoni at the time of the plague in Milan. Corrente, a triple metre dance follows, where I remind all my travelling with Dawn – an artist from London – as well as the friendship with Dario, the musician (featured in Sarabanda). The last movement – Giga – reaches the apex of the heavens because Dawn ‘passed away’ on March 2nd but when I look at the painting “Paradiso” left here, I know (s)he is still with me.

Full texts and images in the contribution for Compendio del Tempo Sospeso at https://www.microbo.net/2020/03/laura-cristin-2/ 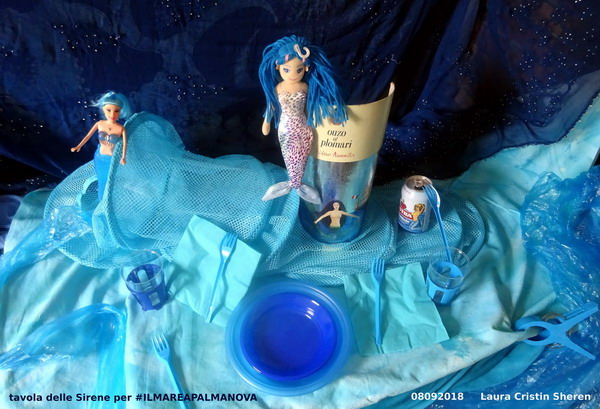 Saturday 8 September, in Piazza Grande in Palmanova, I will participate – with the Tavola delle Sirene – in “Il Mare a Palmanova”, dinner in blue for the 40 years of the law 180, co-organized by Consorzio Il Mosaico and the City of Palmanova, in collaboration with creaa, A+AUD and with the patronage of the Healthcare Company 2, Bassa Friulana, Isontina.
It will be an opportunity to dine with friends on the same or other wavelengths, sharing the experiences related to the direct attendance of the years of Basaglia in Gorizia between 1966 and 1972, to relive and cultivate again, with joy and gratitude, the imprinting of freedom that still animates Sheren’s art/life journey.
Fb page:https://www.facebook.com/events/649109105467383/

On July 19, with Inés and Ayelén, I was back in Venice to visit the 57th Biennale. Soon I will complete with a further image, the project already visible in http://www.lauracristin.it/it/works/a-special-day-in-57biennalevenezia/
Wonderful!

Just the perfect day to let you know something about the Tarots project that is keeping not-only-me busy, from long. On Mardi gras, approaching the turning into the Chinese New Year of the Goat, “Tarots” is published in the “Works” section of this website. A more extensive pdf to download (Intermezzo) goes with it. The journey into this ever surprising/involving theme – treated in a peculiar/subjective way – has come to a crucial point so far. After the silver path, the golden one appears, still ongoing, con-sonant and (in)finite.

On June 13th 2014, at dawn, the Sun will be in the same position of the natal one, after 60 ear_th’s revolutions. At the same time, from the Chinese point of view and calendar, the wooden Horse, yang, of my horoscope will also return, once in 60 yrs. I am happy to share/have shared the Time here on hearth and sky, so far! Celebrations will follow at Lat 45° N and Long 13° E, along the Sea.

The new website is on line! After six months work: hope you enjoy! It’s a sort of art biography in 20 projects that one can read/imagine as when looking at a night sky: start/quit at your will!