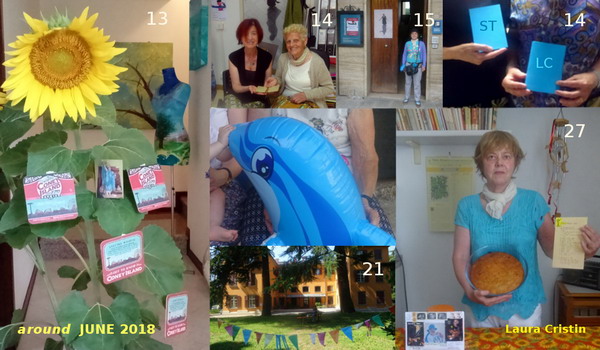 Clockwise: 13: sentimental B.day installation with mailart received from Joel Cohen; 14: Natalia receiving from my mum the diary of my grandma Angela at ADN of Pieve Santo Stefano (Arezzo) – incidentally, Fumis Angela was born on 10 June and died on 17 June 1968 – ; 15: standing at the entrance of the Archive of Diaries; 14: donation of my (art)diaries LC (also containing CG) and ST to Archivio Diaristico Nazionale – incidentally ST that stands for Standards (Tarot paintings) can also stand for Saverio Tutino who founded the Archive and ‘created’ the myth of Che Guevara (born on 14 June) in Italy – ; 27: with Sticker Dude Banana Cake (new receipe) in connection with the reunion of Grateful Dead in Santa Clara (California); 21 (12:07 Summer Solstice): attending the meeting “tra pari” at CSM of Parco Basaglia in Gorizia.

In 2018 many anniversaries occur, such as the 40th from Basaglia’s law #180 (May 1978) and of my marriage (February 1978), the 50th from my trip to Bandiera Gialla (January 1968) in Rome with the psychologist Letizia Comba. This June, special coincidances took place around my B.day. The above card can reveal/explain more. Though, the core of it is only detectable by heART!