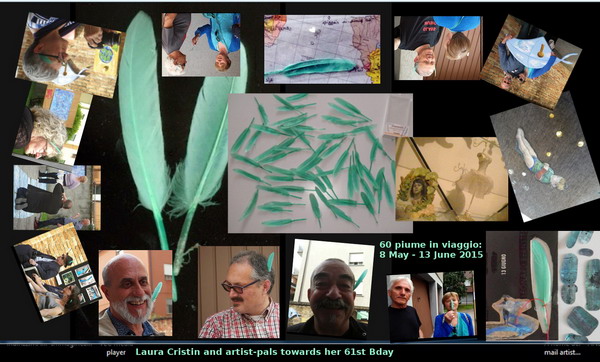 On May 8th, 60 feathers – received as a gift at Easter – were suddenly connected with the years of my life. Next I stamped all of them with my name and a performance took off/started in spite of any rational decision. In the following day, plumes travelled to the “Way Pavilion International” of Venice Biennale at Garage n. 3 where most of them were given out to artist-pals. The remaining feathers – set in proper cards, in transparent wrappings or whatever – will continue their voyage by snail mail or will be delivered on purpose, as long as my next Bday, on June 13th.
http://maurizio-follin-lavia.blogspot.it/2015/04/way-pavilion-international.html

Just the perfect day to let you know something about the Tarots project that is keeping not-only-me busy, from long. On Mardi gras, approaching the turning into the Chinese New Year of the Goat, “Tarots” is published in the “Works” section of this website. A more extensive pdf to download (Intermezzo) goes with it. The journey into this ever surprising/involving theme – treated in a peculiar/subjective way – has come to a crucial point so far. After the silver path, the golden one appears, still ongoing, con-sonant and (in)finite.

Legenda of the card – crib 2014, year of the Seahorse yang – (clockwise from left): 1) ”Intimacy” cm 26×9,5 acrylic and paste on a piece of wood – rescued from the shed – that was used in the Nineties for colour proof, 2) “Selfportrait at 60” cm 14,5×14,5 acrylic and paste on disposable textile coupled with cardboard, 3) “Lorenzo a due anni” cm 14,5×8 acrylic on wood, 3) paper boat in “Sherena Velella artistbook 1r”, detail of a reliquary of a velella velella in “Sherena Velella 1”, 4) “Dario Brunori s as Babbo Natale 2014” activity puppet sheet, 5) Atlas from the center of Mediterraneo, ATCards and title from “Sherena Velella book 1”.

In recent months it was nice to think over the latest things experienced here and there. It enriched my imaginary and urged me to create new stories with scraps, tickets, calendars collected along the art&life way. Among other things, four artist books were handmade and many words were written in ultramarine ink with a nib shaped as the Eiffel Tower. Multimedia attachments like “Sounds and memories around the Mediterraneo” and other more or less ir-relevant videos completed the artist books. Then, I wanted to return to my first love, that was/is painting. “Selfportrait at 60” on a rectangle of nonwoven fabric (I like very much the dotted texture of the material) came out: I had already made it as a collage but acrylics and pastes are more involving and unpredictable! Then I rescued from the shed some wood that I had used in the Nineties for color tests. These were turned into portraits emerging from the turquoise of the sea. Veering towards Christmas time, I am ending the year with a Santa Claus puppet to dress!
Read More...

On October 1, 2014 the mail art exhibition “Art is Our Last Hope” has opened at Phoenix Art Museum in Arizona USA. Curated by Vanessa Davidson and John Held Jr. in conjunction with the work of the Brazilian artist Paulo Bruscky, it will close on November 23. Takes part in the exhibition held in the Orientation Room, an artist box of mine, with the soul of a velella velella picked up last Summer in the center of Mediterraneo. It connects my performance “Sheren in A-MexicO” at Academia de San Carlos in 2006, around a plaster copy of the Winged victory of Samothrace, to the real Nike that I could admire this year in Paris. Not so distant feelings.

The first two artist books on the theme of “Sherena Velella” are almost completed. They are inspired by the velelle velelle met in the navel of Mediterraneo this year. The theme expands beyond a physical place and also in the Time, connecting history, myth with the present and the future. The second copy of the artist book is almost ready to sail for Fundación del Garabato based in Angera/Zaragoza.

16 September 2014, Florence in Italy: it was a unique and wonderful opportunity to meet Ryosuke Cohen, his art, new friends at circolo degli artisti casa di Dante, among masterpieces of the past. Everything and everybody, the situation was just “perfect”, the collaboration, wishing to understand/catch as much as possible from the situation. Ryosuke shown us unexpected sides of Japan and art and humanity.

From my maritime diary:
On Tuesday, September 16th, 2014, late in a sunny morning, wearing my favourite azure silk dress, Florence was on my way. The origin of my journey was the island of Ponza, in the very center of Mediterranean, where I had performed “Sherena Velella” at the finissage of an exhibition. A not so easy travel – by ship, bus, delayed trains and a final yellow taxi had conducted me to Dante’s house. There, along with my two pieces of heavy luggage, I was promptly hearty welcome. Instantly I felt at ease and started to get acquainted with the president of the circolo Lella Marchini and those present, waiting for Gianni Broi (the curator) and Ryosuke with Noriko (his wife) to turn up. The room was/is beautiful, with all the portraits/paintings of “macchiaioli” hanged on the main walls and one could have felt (I did) a bit overwhelmed by the history. Ryosuke Cohen was not new to me, I had met him in Minden, Germany in 2009 and on that occasion he already made a silhouette portrait on one of his brain cell sheets he is known for. These are collages of stamps, stickers, whatever comes from the network and that are chosen/selected by the artist to express a sort of inside essence of what’s going on worldwide. After a while, Gianni arrived. As we were all busy/worried about contacting Ryosuke, at some point, around midday, he magically materializated with his wife at the entrance. He looked radiant and calm, happy to be in Florence (for the first time, as he explained later). The interview was difficult every now and then because both parts had to communicate in a foreign language. Though, the practical part fully explained the core of his work. He sketched the profile of the presents, one by one. Noriko took pictures, that he could refer to for completing the portraits. Gianni was busy in collaging the frame of the honorary citizenship that he had prepared and also adjusting/reducing the size of the poster to fit the drawings’ briefcase I suggested to stick on the back of the big parchment, a significant piece of Gianni’s mail art (a green rectangle with a little mole asking “ what’s the magic formula?”) that Ryosuke had included in brain cell # 147 sent in 1985 for a mail art exhibition at Uffizi in Florence. The mole seemed happy to continue her journey to Japan!
“Birth of Venus” by Botticelli, emerging from the foam of Mediterranean Sea was on my mind, from time to time. Though, the “real” sonorous hair I had used in Ponza, and other proper performance stuff could remain in the luggage. During the meeting a real and true spirit of mail art took shape as a cooperative attitude. Everybody was at the same level, sincerely aimed at making things happen at their best. Perhaps art belongs to the ones that just make it, with a sense of being at service of a common goal?! The reality, topped with an ice cream eaten nearby later, before saying goodbye, was just the performance, that – considering any kind of presence, including the ones, in spirit, from the past, was really successfull.
Read More...

Category : exhibitions, mailart, around the world May 3rd, 2014

“GAC day” in Ponte Nossa (Bergamo) IT, where there’s a mail art exhibition to celebrate the Centennial of Cavellini, the “Open Day of Golden Roots in Europe” showing my piece “Liberty Statue NY/NL” at Kunst Kolonie Veenhuizen, then “micro2 and micro&book” exhibition in San Donato Milanese (Milan) IT, with a “Sheren’s ATLAS” and last but not least I will be at the 4th International Competition “The lace” in Gorizia, IT as a juror. The prizes will be awarded at Palazzo Lantieri, from 10:30.

All these events develop a Cavellinian idea of Time, according to his self-promotion and pre planning of events beyond his life. For mathematical reasons, part of the last century, belongs to me too, since I was born in ’54 – year of the wooden horse, yang (like 2014). Artistically, GAC is now more than alive, as my 60 years or my grandma Angela, whose war diary ’14-’16 I recently happened to read. Time belongs to everybody involved and protagonist in the flux of Life/Art!

From 1 May to 1 June 2014 in Tilly, Belgium, at Acrodacrolivres there’s an exhibition curated by Rino Telaro as a Pollination of London Biennale 2014. I have taken part in the independent exhibition/movement founded and directed by David Medalla since 2004. For each edition I made a card on the theme, as requested for participating, often with the Eros statue of Piccardilly Circus. The Biennale of 2006 in London comes to my mind with all the artists I met and the performances at The Foundry, Orleans House and Sinergy Gallery. Since then, approaching 1st of May, I like to think about my art/life and make a ‘free’ point about it. This time, in Belgium, I participate in ExpoManifestoBrut with a mirror card where miniatures of my previous LB cards make a sort of crown frame.

15 March, at 19:00, in Venezia-Mestre, at 3D Gallery, I take part in the mail art exhibition, with the card “Lord Byron loved to swim”. Curators: Adolfina De Stefani/ MISMOMATIC/Segnoperenne